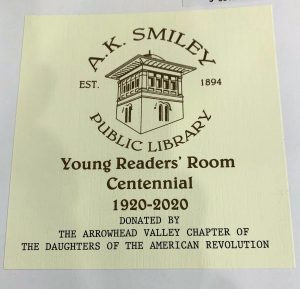 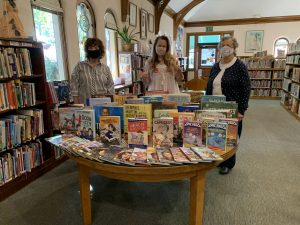 About five years ago, Patricia Westerfield, a former elementary teacher, approached Diane McCalmon with her idea to upgrade some of the old children’s history books at A.K. Smiley Public Library. Soon after that, Pat and Diane visited the library and were shocked as some of these books looked like books they read at the same library years ago.

They met with the newly appointed Executive Director Don McCue. He was very excited but thought if we wanted to display books donated by Arrowhead Valley DAR, we would need to purchase a revolving shelving unit. It seemed just too expensive, so the project was dropped. When Pat became Regent, she and Diane became Co-Chairs of the Historical Preservation Committee. They met several times with Don McCue and Pam Martinez, the children’s librarian to again discuss the purchase of children’s history books. This time shelving was available and the books could be ordered through Amazon Prime. The project was brought before the membership in March 2020 and passed unanimously.

The library sent us their wish list and we were able to purchase 42 new children’s history and biographical books within our budget. When all the books were received, COVID-19 struck and the library was closed to the public. After reading in the paper that the library had “Books to Go”, I called Don McCue and arranged to deliver the books so they could be processed. On July 24, 2020, Pat and Diane went to the library for some publicity photos (maintaining social distancing and wearing masks).

A.K. Smiley Public Library is so thrilled with these books and thankful to all the members of Arrowhead Valley who made this project possible.