Note: Due to server issues, these are articles were delayed posts on the Clarion.

Saturday morning, March 12 started off with a very interesting Past and Present Regents’ Association breakfast and the polls were open for voting.  The morning continued with the AM business session where a moment of silence was observed in honor of Daughter Nancy Reagan and reports were made from districts VIII, IX, X, XI, XII and XIII.

The afternoon business session included the Teller’s report and the announcement that the slate of state officers as presented had been officially elected to office. Additional announcements included that California Daughters had raised over $7,000 that weekend to fully fund the “Monkey Business” campaign for playground equipment at Tamassee School. Additionally as of the afternoon the Guardian Trust Campaign had reached $189,000 in contributions from California Daughters. And Barbara McMahon was named Volunteer Genealogist of the Year. 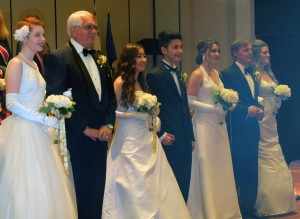 The evening concluded with the Celebration Dinner and debutante presentation. Ten young ladies were presented in the evening festivities including:

On Sunday, March 13, 157 California Daughters who passed away in 2015 were memorialized. Chapters and districts stood for their members as their names were said and a flower was placed in the vase for each chapter represented. The full state necrology report can be found on the CSSDAR Member’s Website.

The Sunday morning business session concluded the chapter and district reports with host Districts I, II and VII. A lovely ending to the morning was the installation of our new state officers, with the exception of Regent and Vice Regent, who will be installed at Continental Congress in June.

Be sure to check out the CSSDAR closed Facebook group for more photos from Daughters all across the state that attended. 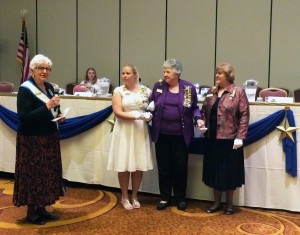