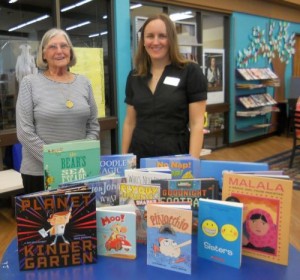 As part of the National Society Daughters of the American Revolution’s “Literacy Promotion Committee”, the Feather River Chapter recently donated fifteen new children’s books to the Butte County Library in Oroville.  The library has programs geared to focus on future readers and the books that were donated were appropriate for several age groups.  Accepting the donation was Sarah Vantrease, Librarian for the Butte County Library in Oroville.  Deep appreciate goes to Feather River Chapter’s Librarian Charlene Peery for all her work in coordinating the purchasing of just the right books to enhance the Butte County Library’s children’s reading program.

Also during Feather River Chapter’s Annual Good Citizens Award Luncheon in February, a special presentation was made by Chapter Regent Diane Reimers.  As part of the chapter being a commemorative partner in the Vietnam War Commemoration, they were pleased to honor Norris Eugene Anderson, the husband of chapter member Retha Anderson, for his military service.  Gene was a member of the Air Force for eleven and a half years.  For nineteen months, he served in Vietnam as a Crew Chief on F4-D/Phantom II aircraft.  After leaving the Air Force, he served in the Army National Guard for nine years.  The Chapter’s thanks go out to Norris Eugene Anderson for his service to our country.