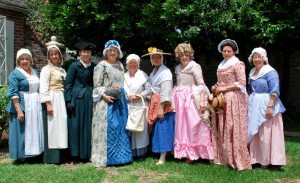 On June 1st, eight women patriots from the 18th Century visited the Martin Severance Chapter in Pasadena to share their stories of how they helped their countrymen in the cause of the Revolution. Lydia Barrington, a Quaker spy from Pennsylvania; Frances Brush Montresor from Vermont influenced Ethan Allen to support Revolution; Lucia Flucker Knox in her riding habit from Massachusetts; Rebecca Biddle of Pennsylvania, provided food for General Washington at Brandywine; Mary “Polly” Hawkins Craig and Rebecca Bryan Boone saved the fort at Bryant’s Station, Virginia from Indians by fetching water; Catherine Van Rensselaer Schuyler of New York set fire to her own wheat to keep it from the British; and Pennsylvanian Margaret Cochran Corbin “Captain Molly,” given a pension for firing the cannon at Fort Washington upon the death of husband.  To explain all about 18th century fashion, fictitious “Polly Polonaise” demonstrated how to dress from a chemise to robe a la polonaise.

Print Friendly
This entry was posted in News - Chapter. Bookmark the permalink.