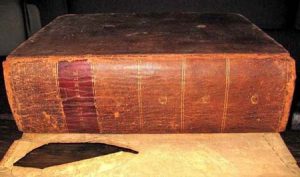 When Catha Hall’s mother passed away in 2014, fifteen boxes of historical and genealogical information arrived at her door. She discovered that an important Hall family Bible was loaned and not returned in the 1920’s. Catha began a search online.  A link appeared for “the Rixey Family Bible” at Swann Auction Galleries in New York City.  This Bible was special because it listed the family’s slave records with her family’s information.  The Swann Gallery put her in touch with the current owner, Jim Melikian, a collector in Phoenix, Arizona.

With assistance from family members, Catha purchased this rare 1806 Bible. It had been owned by Captain Richard Rixey Jr., her 4X great-grandfather and a DAR patriot.  The slave records, recorded in blue, date from 1743 to 1862.  The family record began with the birth of his son, Samuel, in 1780. This marvelous deerskin Bible now resides in Woodside, California.

Catha realizes the importance of the slave holding records. She plans to have copies of the family records and the slave listings made for her family.  Eventually she will donate the Bible to The Museum of Culpeper History in
Culpeper, Virginia, where the Rixey family lived. There will be a proviso that the slave records be shared with The African American Museum in Washington, D.C., the State Library of Virginia, and other museums where people of color do their genealogical research.

Remember this story as you pursue your own family’s historical records. You never know what treasures will be discovered.