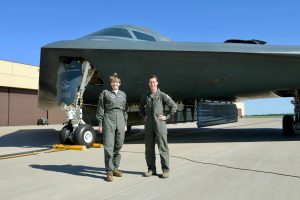 Cahuilla Chapter takes pride in honoring of all its active duty members, but is especially proud of Lt. Col. Nicola “Rogue” Polidor.

Nicky is the Commander of Detachment 5, 29th Training Systems Squadron at Whiteman Air Force Base in Missouri and was recently asked to give the current United States Secretary of the Air Force, Barbara Barrett, a flight in a B-2 Stealth Bomber and organize her visit to Whiteman.

Nicky is just the 6th female B-2 pilot and the first-ever female to pilot a B-2 Stealth Bomber at Rose Parade festivities in January 2020! Congratulations Nicky – well done!

Photo L to R: Barbara Barrett and Nicola Polidor in front of B-1 Stealth Bomber