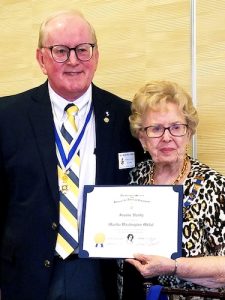 Cahuilla Chapter Honorary Regent, Joanne Hardy, was honored with the Martha Washington Award Medal at the Coachella Valley Chapter of the California Society of the Sons of the American Revolution (SAR) meeting in February.

The Martha Washington Award is the highest honor that SAR can give to a DAR member. It is reserved for those that have given the SAR truly outstanding support.

The Coachella Valley Chapter, SAR, recently celebrated its 25-year anniversary. Bill Haines, President of the SAR chapter, spoke about the support and collaboration that have existed between the Cahuilla Chapter and the local SAR chapter since the SAR chapter’s launch in the Coachella Valley. The two chapters honor their long-standing collaboration by holding an annual joint luncheon. It was at the 2020, joint luncheon that Ms. Hardy was surprised with the presentation of the Martha Washington Award Medal by Mr. Haines. Members of both the Cahuilla Chapter and the SAR Coachella Valley Chapter were present to celebrate the recognition of Joanne Hardy for her extraordinary service.