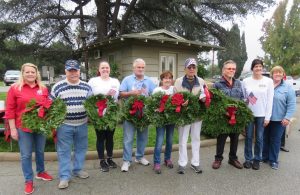 Foggy, misty, and cold weather greeted California State Regent Mrs. Adele Lancaster, National Chair, DAR Service to Veterans, Mrs. Kris Wood, and Daughters from the Covina and Santa Antonia Chapters, on Saturday, December 14, 2019 at the Wreaths Across America ceremony at LaVerne Cemetery, in LaVerne. Over 75 people were in attendance laid over 150 wreaths at the small cemetery.

The Wreaths Across America Ceremonies were led by Karen Lindblom, her daughter, and granddaughter, in their first year coordinating the event. Veterans from the United States Army, Navy, Marine Corps, and Air Force were honored, along with a Marine Corps veteran standing in as a representative for the Coast Guard. These veterans honored their POW/MIA brothers and sisters and all branches of the military for the Posting of the Colors and Pledge of Allegiance led by the local Boy Scouts Troop, the singing of the National Anthem by Ms. Lindblom’s granddaughter Nicole Lindblom, and a rendition of TAPS.

Also in attendance was the Navy Veteran honored, the Mayor of LaVerne, Mr. Don Kendrick. Mrs. Lancaster, Mrs. Wood, and Covina Chapter Regent Mrs. Pamela Schulz thanked Mayor Kendrick for his service, and for attending the event that left not a dry eye (or possibly it was the misty morning), and the Lindblom family for their dedication to the veterans laid to rest at LaVerne Cemetery.