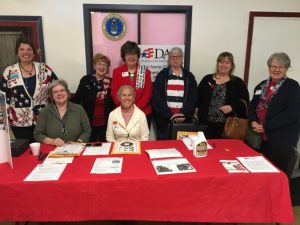 Del Norte Chapter spent November 11, 2019 honoring Veterans by attending the community activities of the day which included early morning flag raising ceremonies, the 10 am parade, the 11 am “Moment of Silence”, and the 12 noon traditional Community luncheon at the Veterans’ Hall, where Del Norte Chapter manned the DAR table, promoting “Wreaths Across America” & Monument Cleaning with D-2, and honored Vietnam Veterans with Vietnam War Commemorative pins.

Del Norte Chapter Vice Regent/Registrar, Cori Higgins, was the keynote speaker of the day to a large luncheon crowd, expounding on her trip to Normandy, France, where she took part in the observance of the 75th anniversary of D-Day. The crowd enjoyed the vigorous narrative of the slide show documenting the D-day ceremonies. The presentation also included documentary video of concentration camps, & houses in Holland where residents were forcibly removed to the camps.

Later that afternoon, Vice Regent Higgi and a contingent of Del Norte Chapter members drove 17 miles to Gasquet American Legion Hall where Cori presented the D-Day program to a Legion audience and the Daughters repeated the promotions of earlier in the day.

After a Veterans’ Day full of tribute to our Veterans, past and present, the Del Norte Daughters headed back to Crescent City satisfied with the accomplishments of the day. 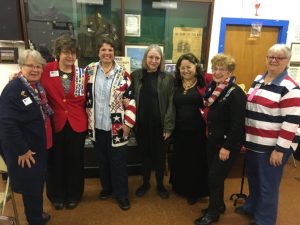