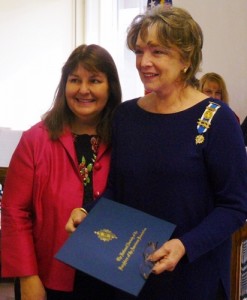 Brenda Sieglock, Regent of the El Toyon Chapter Daughters of the American Revolution presented artist and community volunteer, Sherryl Rasmussen, with the DAR Women in American History Award. This national award recognizes notable “women who serve as an inspiration for their outstanding contributions to their communities in an area of intellectual, educational, social, religious, political, scientific or cultural endeavor.”

Ms. Rasmussen has been recognized for her remarkable accomplishments in the arts. She received a James Irvine Foundation Grant to photograph San Joaquin County Native Americans, spent two years as the photography workshop assistant to Ansel Adams, and seven years with the Friends of Photography Workshops in Carmel. Her photography was featured in “A World of Champions” display hosted by the Discovery Channel at the 1996 Atlanta Olympics. For forty years, Sherryl has devoted herself to San Joaquin County by serving on several Boards. She spends her summers escorting others on Pacific Crest Trail wildflower hikes.