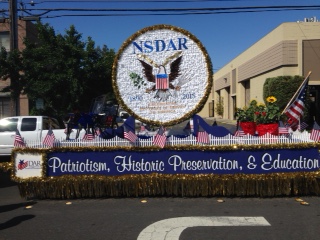 Gaspar de Portola Chapter, Stanford, Calif., participated in the 2015 Redwood City Fourth of July Parade with a patriotic-themed float. The chapter banner preceded the float, upon which sat the focal point – a six foot round DAR 125th anniversary logo.

The float exuded the parade theme of “American Heritage.” The float was festooned with red, white and blue bunting. Along the sides were banners reading “Patriotism, Historic Preservation, Education.” The patriotic music played from the float causing contagious foot tapping, dancing and hand clapping by spectators along the route. The chapter skate-boarders rolled beside the float spreading DAR energy, and chapter members and PMs walked alongside the float and waved cheerful greetings to all spectators. The float won one award this year (the 4th award in 3 years), and another anticipated award is pending from an organization that saw the float and entered a picture of it in their contest.

Gaspar de Portola members are proud of their heritage and enjoy sharing the DAR spirit.