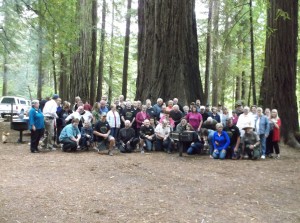 The Del Norte Chapter of the Daughters of the American Revolution, hosted a picnic for the Vietnam Veterans of Company “D”, of the United States Army who served together in 1967 to 1968. The event was held at the National Tribute Grove; which is located at the Jedediah Smith State Park in Crescent City. The Veterans and their wives were given a program and a tour through Stout Grove by California State Parks Ranger Mike Poole. All participants then enjoyed a catered lunch; with a beautiful cake for dessert. Regent Wendy Malone, thanked the veterans for their service on behalf of the Del Norte Chapter and the National Society. DAR Vietnam certificates were presented to 40 deserving veterans; which stated how much they appreciated having not been forgotten.