With the 50th Anniversary of the start of the Vietnam War, chapters across the state continue to remember the sacrifices our veterans have made: 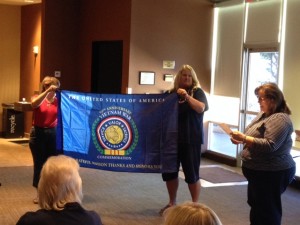 The Antelope Valley Chapter in Lancaster is a partner with the Department of Defense as well as the NSDAR for the Vietnam War 50th anniversary commemoration. Antelope Valley Chapter Commemorative Committee Chair Carol Gilmore recently visited the William J “Pete” Knight Veterans Home of California in Lancaster on March 30, 2015.  In 2011 the U.S. Senate unanimously passed a resolution to make March 30th “Welcome Home Vietnam Veterans Day.” Carol’s visit included taking the Vietnam War 50th Commemorative Flag with her and doing a presentation of the flag and explaining all of the symbols on the flag and what they represent.  Twenty-two Vietnam War Veterans received a NSDAR Vietnam War Certificate in appreciation of their valor and service.  All war veterans were given a big round of applause to thank them for their service.

The chapter has already planned six more events around the Antelope Valley where they will be traveling with the flag and showing great appreciation to the Vietnam War Veterans and the 50th anniversary commemoration.  These include three V.F.W. post presentations, Lancaster Cemetery on Memorial Day, The Harley owners Group chapter meeting, as well as the Vets for Vets car show in September just to name a few. 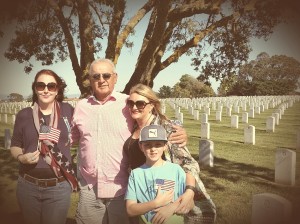 On Sunday April 11th, 2015 Mt. Diablo Historian and Christy Kirkham Martin — the incoming Commemorative Events Chair for the Mt. Diablo Chapter, accompanied Vietnam Veteran and Purple Heart recipient, Rich Lopez to the National Cemetery in San Bruno. The day was planned to honor and commemorate his service during the Vietnam War. The group toured the site, visited with other Vietnam Veterans and attended the closing ceremony for The Wall That Heals — featuring remarks by Los Gatos, CA Regent Kim Worrell. The touring Vietnam Wall memorial is continuing its tour through the US. It is a moving experience and one that should not be missed!