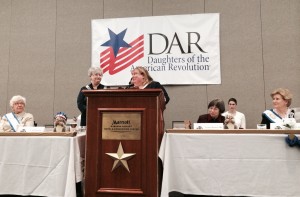 The last morning of the 107th Annual State Conference began with a social for the State Chairmen. Daughters enjoyed catching up with each other over breakfast.

Following the social the annual State Memorial Service was held to honor the 171 California Daughters that had passed away since the last State Conference. Dorla Dean Kemper, Honorary President General gave a tribute to distinguished California Daughter, Susan Leonor Williams Denney of the Jose Maria Amador Chapter who passed away January 8, 2015.  And Linda Gist Calvin, Honorary President General gave a Tribute to 50 Year Daughters.  Both Jewish and Christian prayers were recited and members were invited to stand when their chapter name was called in memory of their DAR sisters that had passed.  The Annual Memorial is a beloved tradition that allows CSSDAR to honor the amazing women that have passed and who have touched our lives and improved our great organization. To see a list of Daughters that have passed during the Jackson Administration visit the State Member’s website. 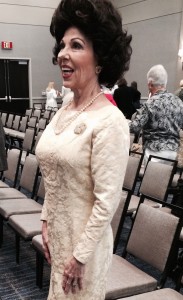 The final Business Session of the conference included reports from Districts VIII, IX, and XV.  Lady Bird Johnson even made an appearance on behalf of District IX Director Gay Storm Oakes! The final total conference attendance numbered at 466. Daughters enjoyed the last of State Corresponding Secretary Adele Lancaster’s announcements and were informed that California Daughters purchased a total of eight new desks for KDS this weekend alone! Daughters were also advised that many opportunities exist to support the State Society at the upcoming Continental Congress in Washington D.C. Be on the look out for more information regarding this and please consider volunteering some of your time.

The conference closed with a heartfelt acknowledgement of Conference Chair Patty Bogaty Schned and a tremendously moving rendition of God Bless America where all Daughters joined hands and sang in unison together. 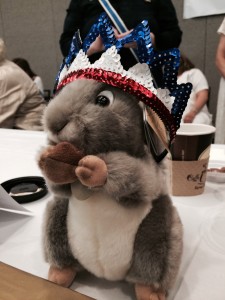 The 107th Annual State Conference was a wonderful time. Have you claimed your squirrel yet?!

This Daughter is always moved by the amazing ideas shared, patriotism exhibited and camaraderie found at each State gathering. State Conference is a wonderful way to garner a better understanding of our State and National Societies and to learn how you can make a difference.

We hope you have enjoyed our special Conference Daily Digests and will now return to the regular weekly Clarion updates. On behalf of the Conference Committee we hope to see even more of you at the upcoming Fall Council Meetings and next year’s 108th State Conference!