Sources for Service, Oath of Fidelity/Oaths of Allegiance – What are these oaths anyway? 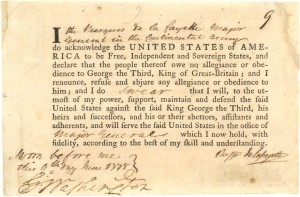 Early in the Revolution, the states realized that they needed to separate their citizens into two categories, those who supported freedom from British rule, and those who were still loyal to the crown. By requiring all men to swear their allegiance to the state in which they lived helped weed out Tories and pushed others, who were undecided, to commit their support to the Colonists. Religious groups such as the Quakers and Mennonites, who were against swearing, were asked to affirm their fidelity to the new government.  Refusal to sign could result in triple taxes, fines, or imprisonment, denied access to the courts, loss of public service jobs, loss of permits required by some businesses, confiscation of their lands and estates, and so on.

Beginning in 1777, the Continental Congress ordered the states to enact laws that required free males above the age of 18, or 21, to take the Oath of Allegiance presented by their respective state’s representatives.  Prior to 1777, many of these states had already enacted such legislation.  The wording of these documents varies from state to state, and finding the copies of these documents can be challenging.

As an example, of one states wording, the Commonwealth of Virginia’s Oath, was enacted in on 7 Jun 1777, here is a snippet of their wording “that these United Colonies are, and, of fight, ought to be, Free and Independent States; that they are absolved from allegiance to the British crown, and that all political connection between them, and the state of Great Britain, is, and ought to be, totally dissolved.”

Locating New England oaths can be a bit easier since this area was a town based society. The oaths are likely to be on the town level.  On rare occasions, letters emerge from town clerks in Connecticut stating that the town records show that Joe Doe took the Oath of Allegiance on [date].   Over all I do not know of a published source with oaths of allegiance for the entire New England states. The states of Massachusetts and Rhode Island are troublesome.  As to date I have not seen any oath of allegiance for these two states.  This said, many town records of Massachusetts, and possibly Rhode Island include many references to acts that would constitute patriotic service, even if they don’t give lists of those who took the oath. These acts were probably a result of a citizenry petition which may also constitute proof of service.

In the New Hampshire State Papers series, volume 8, it gives the names of those individuals who took, and those who refused to take the Association Test in 1776.  This test was very similar to the oaths of fidelity/allegiance, and you can also find the names of individuals who took the Association Test in New York State in the two volumes “Calendar of Historical Manuscripts.”  The caveat about those who took the Association Test in New York is that they were taken very early, in the spring and summer 1775, and some of those same individuals later took the oath of allegiance to British Royal Governor Tryon in 1777. Care must be taken on this accord. As many of you already know, the Pennsylvania Archives Revolution War period, of their collection is digitized so the oaths are readily available on line, however the signers were listed by regions, not towns, so proving a man’s residence from these lists can be tricky for the best of us.

Since I do research in both the North and the South, outside of New England, the oaths are likely to be found either at the county level, or perhaps copies might be found in the respective state archives, or even in county history books.  The situation is that oaths are, in many instances, found few and far between.  There are some published oaths for Pennsylvania, Maryland, Virginia, New Jersey, Delaware, and a handful for North Carolina.  To date, I have not found an oath for South Carolina or for Georgia, however this doesn’t mean they don’t exist.

In areas where there is no documented record of Oaths of Allegiance you should remember that in some instances patriots are established with oaths that had to be taken in order to do something else.  The two best examples supplied to me by NSDAR Staff Genealogist Forrest Crosley are:

North Carolina, at the session of the General Assembly that convened 15 Nov 1777, in order for an individual to make a land entry to try and claim land being granted by the state of North Carolina they had to first take the oath or affirmation of allegiance and abjuration [The State Records of North Carolina, Volume XXIV, pp. 43-44].  Therefore, if someone made a land entry in NC between 15 Nov 1777, and 26 Dec 1783, that would constitute patriotic service.  The service description reads in those cases “Took Oath of Allegiance to Make Land Entry, [name of county], [year].”

Virginia Preemption & Settlement Warrants.  In May 1779 the Virginia assembly enacted legislation allowing individuals who were already settled in nine frontier counties to make legal claims to their plots of land.  However, in order to do so, they first had to take the Oath of Allegiance to Virginia.  The nine counties were divided into four separate districts: Kentucky County, which was its own district; Monongalia, Yohogania & Ohio Counties, a separate district; Augusta, Botetourt & Greenbrier Counties another district; and the last district was comprised of Washington & Montgomery Counties  [Hening’s Statutes at Large, Vol. 10, pp. 35-50; 177-180. If you wish to look at the legislation go to http://vagenweb.org/hening/].  Online link to these preemptions, all counties are included, can be found at the Kentucky Secretary of State’s Land Office website: http://sos.ky.gov/land/search/.  Took Oath of Allegiance to Make Land Claim under Settlement/Preemption Rights.  This is one excellent example of where, if you establish someone with this service, you don’t have to find any additional information for residence, because the law states they had to be settled on that land and working it.

The Public Records of Connecticut from Oct 1776, to Feb 1778, page 412-3, indicates that refusal or neglecting to take the oath of fidelity prescribed by this state, an individual cannot purchase or transfer Connecticut real estate, therefore as indicated above if the man bought or sold land during this period it is assumed that he signed the oath.

Be mindful as our genealogy staff evaluates and re-evaluates these land sources for service, so these examples could be re-evaluated and denied at any given time.

Print Friendly
This entry was posted in Chapter Registrar, Genealogy. Bookmark the permalink.