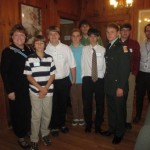 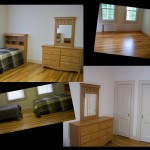 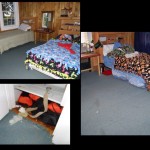 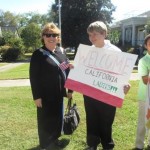 Several California Daughters visited Pouch Cottage in early October in conjunction with Founders’ Day at Tamassee DAR School.  State Regent Debbie Jamison traveled with State Parliamentarian Mary Brown to Washington, DC, for the October 2013 National Board of Management meeting.  At the conclusion of that meeting, the National Executives, State Regents and other members boarded buses to head out on the DAR School Tour. You can read all about the tour by visiting the President General’s Blog. Participating in the DAR School tour were Corresponding Secretary General Karon Jarrard and Carole Vercellino.  Carole is a member of Jose Maria Amador Chapter and a school advisory committee member.

The state regent and state parliamentarian flew from DC to Huntsville, Alabama; rented a car; and drove to Kate Duncan Smith DAR School, where they met the school tour participants. They also met up with State Historian Adele Lancaster, newly appointed Member-At-Large for the KDS Board of Trustees, who flew out for the trustee meeting.  After two days at KDS, Debbie and Mary drove to Clemson, South Carolina, to prepare for festivities at the Tamassee DAR School Founders’ Day.

In Clemson, which is about a half-an-hour from Tamassee, we connected with Virginia DeGregory from Sacramento Chapter. She is a member of the advisory committee at Tamassee, and took time out of her vacation to fly over to South Carolina for the advisory committee meeting.  When we arrived on the first day of Founder’s Day, the bus tour and guests were greeted by students bearing signs.  The “Welcome California Ladies” sign was held by a Pouch Cottage student. It was so nice to see him again and to catch up since our visit last fall.

The Founders’ Day event schedule was full and fun. On day one (Wednesday) after the bus tour arrived, we attended a lovely lunch in the dining hall.  This was followed by an Advisory Committee Meeting in the chapel, and then the DAR Council Meeting in the board room of the administration building.  The Council meeting was attended by all regents whose states sponsor buildings at Tamassee.  The campus was open for tours during the afternoon. California Daughters visited with the boys and teaching parents at Pouch Cottage.  The State Society purchased a new Sony DVD player and sound system for Pouch Cottage. The students were thrilled. Their DVD player had been malfunctioning for some time. The boys were so excited to receive a new DVD player, that the minute the system was dropped off that morning, they worked on getting it set up so they could watch movies in the afternoon.  By the time California Daughters met at Pouch Cottage for a tour, the boys had the system all set up and ready to go!  The state regent appreciated an invitation to come back later in the day to watch movies.

DAR members who toured Pouch Cottage got to see the newly painted bedrooms and refinished wood floors.  As you can see by the before and after photos, the floors in the sleeping rooms were covered with very old and worn out indoor/outdoor carpet. Chapter donations received on the State remittance form provided the funds to remove the old carpet and refinish the floors.  The work was done while the students were off  campus this summer. The students who have lived in Pouch Cottage during the last year could not say enough about how much they love the new floors.  “Easy to clean” was the statement heard most often.

In the early evening on day one, DAR members attended a social hour and a wonderful banquet at the Clemson Madren Center.  The venue is a conference center, inn, and golf course on the campus of Clemson University.  It was a nice time visiting with members from all over the country.  We were pleased to be seated with staff from Tamassee DAR School – women we communicate with all year long via email!  We told staff to be looking out for “bee” grocery bags full of snacks, gifts, and school supplies for the students at Pouch Cottage, from California chapters.  School personnel thanked us for the needed items chapters will send through the end of summer 2014.  A reminder: students at Pouch Cottage are in grades 7 – 12.

Day two at Tamassee was Founders’ Day. The Georgia Talmadge Auditorium was filled with students, DAR members, guests, and school staff.  State Regents whose states had met the $5,000 donation minimum were seated on the stage with National Executive Officers and other dignitaries.  It was an honor as state regent to formally dedicate contributions made by the California Daughters during this past year.

Our weekend at Tamassee ended with everyone attending a delicious luncheon hosted by the South Carolina State Society. Following lunch, we said goodbye to Virginia DeGregory as she headed to the airport to rejoin her family vacation.  We kissed our other friends goodbye as they boarded the bus and hit the road for Crossnore School in North Carolina.  Debbie and Mary drove back to Clemson. We did make an afternoon detour to visit the John C. Calhoun house (Fort Hill Plantation) on the campus of Clemson University http://www.clemson.edu/about/history/properties/fort-hill/ .  It is an amazing and beautiful place to visit. Due to the federal government shutdown, most of the sites we planned to see while on the road were closed to the public, but we still managed to have lots of fun anyway!