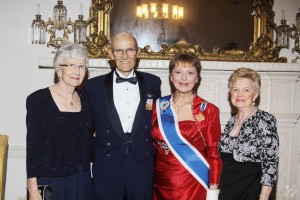 National Chairman Patricia Hance presented the National Outstanding Veteran Award on National Defense Night at Continental Congress. In her presentation she described the criteria for the award and told a little bit about the National winner:

The Outstanding Veterans Volunteer Award is presented to a veteran in recognition of outstanding achievement in personal, professional, and family life.  A veteran must have made significant contributions of leadership, patriotism, and increased public awareness of veterans.  Master Sergeant Ernest W. Conner joined the United States Air Force in 1955 serving until 1976, including two tours in Vietnam. He flew 138 combat missions; received 7 Air Medals; 2 Commendation Medals; and many other medals and awards. Since retirement, Mr. Conner has served on the Merced County Veterans of Foreign Wars Honor Guard. He has traveled over 4,800 miles volunteering over the years participating in burial services to insure proper burial services for veterans.  Mr. Conner participated in the Merced Fairgrounds Japanese American World War II Detainment Camp Memorial Dedication. One of his most outstanding efforts has been to collect over 22,000 pounds of almonds and 5000 boxes of Girl Scout Cookies that he shipped to our military.  He has raised over $30,000 for shipping. Mr. Conner has collected over 3,000 books and magazines to donate to veterans at the VA Hospital in Fresno. He traveled from California to be with us tonight, and seated in the special reserved seating is his wife of 56 years, JoAnn, and members of his family.  Mr. Conner was nominated by the Merced River Chapter, Andrea Summerlin, Regent. Madam President General, may I present the 2013 Outstanding Veteran Volunteer, Master Sergeant Ernest W. Conner.

Mr. Conner then made his comments and accepted his award from the National Society. California Daughters were so proud of this amazing veteran!  His acceptance speech follows:

Madam President General! I am extremely grateful and humbly accept this wonderful award.  Never would I have imagined since taking my oath of enlistment into the Air Force just across the Potomac in Alexandria nearly 6o years ago that I would receive the greatest award that I have ever been presented in this historic and beautiful Constitution Hall. It is particularly pleasing that I am receiving an award for a mission that has been longstanding by the DAR. You are constantly keeping the concept of patriotism alive by keeping the memories of past veterans alive as well as promoting the wellbeing of our living veterans and current Freedom Defenders. Your ancestors that began with a rag tag group of volunteers that gained our freedom, and has evolved just four decades ago as once again an all volunteer force.

I would like to thank my lovely wife, JoAnn, my wonderful daughter Christine, and my family, for their love and support. I would like to thank the VFW, American Legion, The Air Force Gunners Association and the generous support of folks across the nation and the central valley of California. A special thanks goes to the Almond Grower friends that donated over 22,000 pounds of almonds that were shipped to our troops deployed around the world. I would especially thank my home Elks Lodge 1240 in Merced, California, for their extreme confidence and unwavering and unfettered support and encouragement. Operating under the Elks umbrella they allowed me to proudly put into action the National Elks Motto, “As long as there are veterans the Benevolent and Protective Order of Elks will not forget them!”

I humbly and proudly accept this wonderful award in the name of all the veterans since before we became a free and independent nation and to those that are keeping the light of freedom shining brightly around the world as we sit in peace and comfort in this Capitol City known around the world as the cornerstone of freedom.  In my lifetime I have known many veterans from World War I and I have fond memories of my visit with Cpl Frank Buckles, the last surviving combat veteran of World War I, just 4 ½ years ago. I served with many of the “Greatest Generation” of World War II, and Korea and served in Aerial Combat with many during the Viet Nam War, many whose names are inscribed on the Viet Nam wall, just steps from this location.  Since my retirement I have had the pleasure especially in the last ten years to interact frequently with the current generation of men and women in uniform. I firmly believe that the current generation of freedom defenders have raised the bar to unbelievable heights in their dedication, commitment and patriotism by “Volunteering All Of Their Tomorrows For Our Today!” God bless our troops and veterans, and God bless America. Thank you very  much.