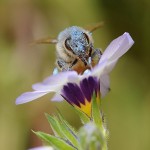 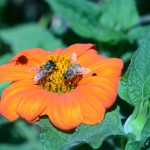 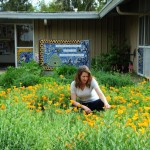 Entrance to the Laidlaw facility. 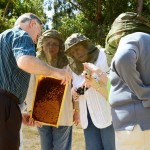 Dr. Eric Mussen with board members in apiary.

The following article was written by Kathy Keatley Garvey of the UC Davis Entomology Department. I called her in the fall of 2011 to inquire about bee research at the university. During our conversation, she mentioned that she knew a lot about DAR because she had previously been a journalist and had written about our organization. Kathy also revealed that she had two Revolutionary War ancestors. I asked if I could give her contact information to a chapter in her area. She gave her permission and is now a prospective member of the Chief Solano Chapter in Fairfield, California. Kathy is a micro-photographer and has a huge catalogue of over 100,000 photos that includes honey bees, and other insects. She has shared many of these photos with me and has given permission for us to use some of them.  Thank you, Kathy for this very informative article and for your support of this important project!

It was a trip to bee-hold.

State Regent Debbie Jamison and her California State Society Governing Board, Daughters of the American Revolution, learned about honey bees and bee research at their September 13, 2012 visit to the Harry H. Laidlaw Jr. Honey Bee Research Facility at the University of California, Davis.

The Laidlaw facility, located on Bee Biology Road, west of the central campus, is the largest and most comprehensive state‐supported apiculture facility in North America and the only one in California. It was named for bee biologist/professor Harry Hyde Laidlaw Jr. (1907-2003), known as “the father of honey bee genetics.”

Extension apiculturist Eric Mussen of the UC Davis Department of Entomology, shared his bee expertise, which spans four decades. He opened research hives so the DAR visitors could view the queen bee, worker bees and drones, and the activity within.

The honey bee is not native to the United States, Mussen said. “European colonists introduced honey bees to the Jamestown in 1622. Today bees pollinate U.S. crops worth billions of dollars.” Honey bees are responsible for pollinating about one-third of the food we eat,” Mussen said. Bees are especially crucial to the state’s almond production. California has 800,000 acres of almonds, and each acre requires two hives for pollination.

Approximately 250 commercial California beekeepers operate about 500,000 honey bee colonies, approximately one-fifth of the country’s supply. “More than  72 percent of commercial crop pollination is conducted in California,” Mussen said. “We also have about 6,000 small scale beekeepers, who tend to keep one to five colonies for fun.”

“However, honey bees are in trouble,” Mussen said. Colony collapse disorder (CCD), a mysterious malady first detected in California in 2006, is taking its toll, resulting in losses estimated at 30 percent or more annually. CCD is believed caused by a multitude of factors, including diseases, pests, parasites, pesticides, malnutrition and stress.

Said Johnson: “Broadly speaking, to keep bees healthy we need (1) to understand which of the various threats to honey bees–viruses, mites, pathogenic fungi, poor artificial feeds, or pesticides–are most significant, (2) develop management and control strategies that mitigate the effects of these most significant threats, and (3) develop further our understanding of the honeybee immune system so that we can predict the impact of future threats and better manage these animals.”

Johnson’s other key research is on the system of division of labor in bees, on the genetic basis of social behavior in bees, and the nature by which colonies allocate workers to tasks. “Such basic understanding of honey bee biology provides the foundation on which applied apiculture rests,” he said.

The Johnson lab is currently finishing work on determining rates of multiple infections of viruses across California. “We have data for commercial operators who use their bees for pollination, queen breeders, and hobbyists. As commercial operators keep bees in the most stressful manner, this study will let us know to what extent management is responsible for current levels of bee mortality. Following this study, we will begin lab trials in which we will infect bees with different combination of pathogens and stressors. This work will lead to several publications on the current state of honey bee health, and on the basic responses of the bee immune system to threats of commercial relevance. We will also be able to make recommendations as to what colonies to cull, in case combinations of pathogens are circulating that are highly infectious and for which there is little hope of curing prior to their spreading their pathogens.”

California State Beekeepers Association recently funded research by Johnson and Mussen to conduct studies of best-feeding strategies for newly founded colonies. Specific objectives of this project are (1) determine the distribution of pathogenic viruses in apiaries across California; (2) determine what combinations of viruses and other pathogens are most pathogenic to bees; (3) disseminate information from these studies to commercial apiculture; and (4) continue basic research on honey bee sociality.

The DAR officials concluded their visit with a tour of the adjacent Häagen-Dazs Honey Bee Haven, a half-acre bee friendly garden planted in the fall of 2009. The haven serves a four-fold purpose:  to provide a year-around food resource for the bees in the Laidlaw apiary and for other pollinators, to raise public awareness about the plight of honey bees, to encourage visitors to plant bee friendly plants, and to provide research opportunities.