Magical Journey of Women and the American Revolution 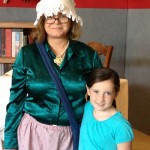 Thanks to the writing skills of prospective member Kelly Hartmann, the Letitia Coxe Shelby Chapter presented a delightful skit at the December 1, meeting.  Joanne Murphy played the part of Penelope Barker from N. C. who organized women to refuse to drink British tea. Judy Diener was Hannah Arnett, a speaker who shamed the men to continue to fight. Emily Geiger, a spy who ate a message to keep it out of British hands, was portrayed by Kelly Hartmann. The roll of Elizabeth Burgin who helped over 200 men escape from a prison ship was played by Marlene Ninteman and Jane Zoch was Margaret Corbin, a female soldier who continued to fight after her husband was killed. The part of Grace and Rachel Martin, sister-in-laws who posed as men to steal British documents, were played by Susan Hudson and Irene Hobbs. The most important roll was Lilly, a young modern day school girl who was researching the women of the Revolution, and who introduced each woman, was portrayed by 9 year old Charisma Massey.

Print Friendly
This entry was posted in News - Chapter, Program. Bookmark the permalink.