Words of Wisdom, Words of Women 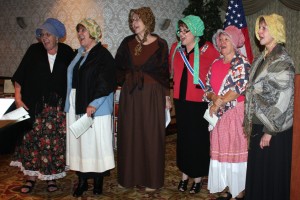 Wow!  The American Heritage Tea at the Radisson Hotel held October 20th at the Radisson Hotel in Fresno  was fantastic!  The words of women like Amelia Stewart Knight, Mary Rockwood Powers and Sandra Orozco’s great, great grandmother Missouri, were inspiring.  These women dealt everyday with hardships I could never imagine and took it all in stride, with humor and perseverance.  They were very creative in solving their everyday problems.

State Chaplain Sandra Orozco and the State Board of Directors looked great in their prairie bonnets and shawls reading from the diaries of these very brave and hardy women. Lisa DeHart’s display of artifacts from the Clark-Skidmore Party of 1852 helped bring these stories to life.  And the desserts…..oh, my!

My thanks go to all who helped make this wonderful event successful!  Thank you!

P.S. from the State Regent:  Tea Chairman Arleen Richards did a wonderful job organizing the event, creating beautiful program booklets, setting up the event and dealing with every detail.  Thank you Arleen and your daughter, Ashley Richards, for all you did to make this such a beautiful event. ~ Deb