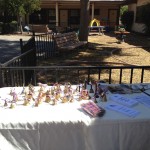 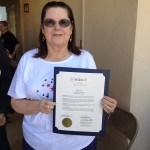 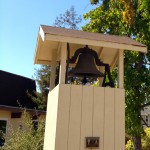 Thirty five people attended the Ringing of the Bells on Monday, September 17th.  Monday was also the day of the original signing of the Constitution. Attendees ranged in age from three months to ninety five. Sandy Clark, the chapter’s Constitution Week Chairman, did her usual outstanding job of organizing this event, her seventh year. At 1:00 p.m., the large Memorial Bell in the bell tower at Asbury United Methodist Church was rung by Sandy 13 times in honor of the original 13 colonies, as the rest of the group rang their bells. The Asbury Memorial Bell dates to approximately1885 and could be heard for blocks! It was inspiring to think that from coast to coast, at the same time, our DAR sisters were also ringing bells in honor of the Constitution. Sandy’s display, including the numerous bells tied with ribbons, which she collects, was impressive. She also gave interesting information not widely known about our Constitution. The ceremony was a wonderful educational experience for all who attended.