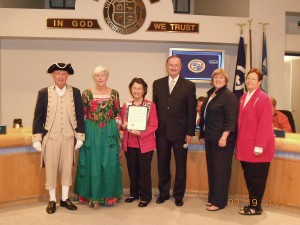 The Santa Margarita Chapter was honored to lead the Pledge of Allegiance to the Flag of the United States of America at the Oceanside City Council meeting. Dressed in a period dress that she had made, past regent Chris Keays, led the Pledge. Chris was accompanied by her husband, Wendall Keays, who was dressed in a Revolutionary War uniform. Regent Wanda Prosser accepted a Constitution Week Proclamation from Mayor Jim Wood. Chapter member and CSSDAR State Historian, Adele Lancaster, and chapter Secretary Diana Cook, were present for the presentation. The meeting is televised locally so the regent was able to inform the community about Constitution Week and the DAR involvement in making it a national celebration. She was also able to explain to the community about the DAR Constitution Hall being the only structure in America built to honor the Constitution of the United States of America.