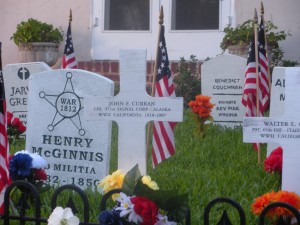 To commemorate and honor her ancestors’ sacrifice to achieve freedom, independence, and liberty, Martin Severance Chapter member Carole Curran, displays a “Patriot Garden” in her front yard from Patriots Day to Veterans Day.

Among those honored from the Revolutionary War are patriots Jarvis Greene of Virginia, who gave the ultimate sacrifice for his country, dying at the Battle of Blue Lick, as well as others who served in many of the colonies. This year, two headstones were added to commemorate Carole’s War of 1812 ancestors, Henry McGinnis and David Henderson.  Crosses serve to remember those from WWII. Carole’s father, Walter Couchman, landed in Italy and helped liberate Dachau Concentration Camp. Her father-in-law, John Curran, served in the Alaskan Campaign.

This display encompasses her heritage but also reminds the public passing by of the sacrifices made by veterans throughout American history for our freedom, independence, and liberty.

Print Friendly
This entry was posted in DAR Service for Veterans, News - Chapter. Bookmark the permalink.