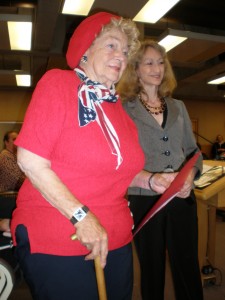 California Secretary of State Debra Bowen visited Santa Cruz on September 11, honoring Constance “Connie” Adkins for her 60 years of service to California as a poll worker. Connie started working elections in the 1950’s. Her first election as a poll worker ushered in the Eisenhower era. “It’s a patriotic thing to do and I was raised to be patriotic,” said Connie, sporting an American flag scarf. The colors of choice for all her ensembles are red, white, and blue. Connie received a certificate honoring her service to California from Secretary Bowen and was also awarded a certificate for her service to Santa Cruz County by the Board of Supervisors. Santa Cruz Chapter Regent Ann Lauten Fay and Registrar Sue Kerr attended the award ceremony as Connie’s guests. Connie, a 25-year member of the DAR, and current Vice-Regent of the Santa Cruz Chapter, will celebrate her 86th birthday this November 6, working the polls in Scotts Valley.

Print Friendly
This entry was posted in News - Chapter. Bookmark the permalink.