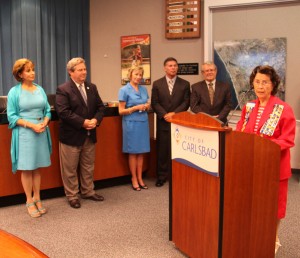 Regent Wanda Prosser of the Santa Margarita Chapter was honored to accept a Constitution Week Proclamation from the City of Carlsbad. Council member Mark Packard presented the proclamation on behalf of Mayor Matt Hall, Mayor pro-tem Ann Kulchin, and council members Farrah Douglas and Keith Blackburn. Wanda told the assembled citizens, as well as those of the city of Carlsbad’s television audience, of the efforts of the NSDAR in petitioning the U.S. Congress to establish September 17-23 as Constitution Week, and the resulting Public Law #915 being signed into law by President Dwight D. Eisenhower on August 2, 1956. Wanda also encouraged all to participate with the nation in Bells Across America at 1:00p.m., on September 17th.